Its Not A Science

The plumbing for this swap is anythign but a science. I have posted how I did things, but it cannot be taken as "the" way to do it. There are many ways to plumb the engine. Alot of it will have to do with what leftovers you have from part and donor cars. Of course the most reliable way is to use Aero/Nautical (-AN) lines. They cost alot of money usually, but if they're reliable enough for an airplane, they're reliable enough for your car; plus, they're really pretty.

With that said. Keep an open mind with this part of the swap. Being creative can result in some very functional and aesthetically pleasing plumbing.

A Good Tool for Custom Pipes

Whenever you need to route a pipe around something, a good method is to get some thick household electrical wire, or fence wire, or old brake line (it really doesn't matter as long as it can hold its shape). You take this and bend it how you would like your pipes to run. Take this to the store and say "Can you make me a pipe that is 'X' diameter and bent like this" (hold up wire)? Make their lives easier and don't make too tight of radiuses for larger pipes.

Lets start with the oil and water lines for the turbo. By mixing and matching Starion and DSM banjo fittings, you can build a pretty nice setup. The water hard lines can be cut and bent with 3/8" hose to extend them. For the Oil inlet line I bought a SS line from RRE and will be doing a modification that moves the source from the banjo bolt at the back of the head to the freshly filtered, higher pressured source at the oil filter bracket as you can read here.

I had to get even more creative with the oil drain. It will see very little pressure, but it will be mounted directly to the hot center cartridge and will have hot oil flowing through it. Unlike the water lines, if this oil line blows out the effects would be fiery and most likely the end of the motor and turbo.

So what dad and I decided to do was to make new flanges and weld custom bent pipes from the turbo to the oil pan. There is a small section of rubber hose closer to the oil pan. Hopefully this will not get so hot that it fails. "But isn't custom bending oil lines hard, and won't they kink?" No! What we did was very neat. Since it is winter, we just threw the pipe in the wood stove for about 5 minutes. It came out red hot and we easily could bend it with the vice, and plyers. I let it touch my skin once. OMFG. It didn't burn my skin... it turned it straight to yellow ash. So watch yourself. (Also works well with bon fires.) Just be sure to bend the pipe so that it clears the motor mounts and crossmember.

These are the pipes that connect the radiator to the motor. There is an 'In' and 'out' of the block. The 'in' comes from the bottom outlet on the radiator along with the turbo return and heater/TB return. The 'out' line comes from the water neck that comes off of the thermostat at the back of the head (what a stupid spot to put it). So here is one way to do it.

Starting with the 'in' side that flows into the water pump there is a large pipe that runs under the exhaust manifold and around to the heater core on the back of the block. This is thing aluminized steel. What you should do is cut the end of the big section off (see the photo above). I took what I cut off and weld it to the pipe up near the alternator. Try not to do this. You would be better off to weld a piece of pipe on that is long enough to clear the alternator and all that. I on the other hand will have a rubber hose running right in between my alternator and exhaust manifold. I do, however, have it heat wrapped. From here I have gotten a pipe bent to go to the radiator. It twists up over top of the power steering pump and then down between the fans and the alternator. The shop that I had the pipe bent at only had 1 1/2" pipe. I really needed 1 1/4". luckily they crush bent it. This narrowed the pipe down enough that my rubber water hoses would fit on. 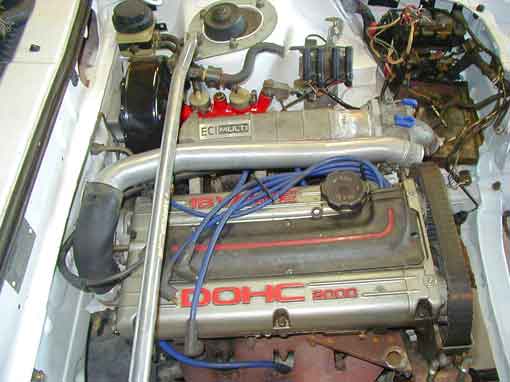 Coming from the termostat I used one of the pipes off of the intercooler since I won't be needing it anymore. To go to the radiator all you need is the straightest section of IC hose from either the Starion or the DSM. Don't cut it too short!!! I had to go to the junkyard to find one because I cut 4 of them too short (Doh!). There is one that is a perfect fit. Don't ask me which car it was off of though.

Coming down over the top of the motor around back I used one of the IC elbows off of one of the cars, then had the other (short) intercooler pipe welded to my hacked up water neck. To plug up the A/C temp sensor hole, I used the plug that came out of where my new SS oil line went. Reduce/Reuse/Recycle!

This setup reused a lot of parts and kept the valve cover accessible. It also clears the hood and strut tower brace. Man does it look pretty too.

To keep even a little bit of comfort during the winter, I have to keep my heater. For these hoses, I just reused some heater hoses off of either the DSM or Starion. Forget which one came from which, but mix and match and you can find some. If you can't, however, you will need to find some hose that can hold pressure and take the heat. You might need to get creative (and long) with it to get it to bend right. If you cannot find anything that can work, take your bent wire to the auto parts store and see what might work.

As you can see from one of the above photos, all I used was a 3" elbow. I actually just cut up an aluminum, powder coated cold air intake off of an IS300. I then used some plumbing supplies to hook everything up. The turbo inlet coupler will be replaced by a silicone reducer at some point due to the heat it sees from the compressor housing.

Why'd I used 2 different sizes? Because that's all I could find in the woods! But I did think about it some. The compressor outlet is only 1 7/8". The air is flowing very fast out of the turbo. Why slow it down by going big right away? I keep it moving fast till it gets to the intercooler where it spreads out and slows down (and hopefully cools down). From here it is already moving slow. Why stuff it into a small pipe again? 2.5" is the largest diameter pipe I could fit between the battery and the radiator. This goes up to a bend that goes into the throttle body. I heat wrapped the pipe after the intercooler so that it doesn't soak up any heat from the radiator or engine bay.

We moved the intercooler up to the top of the radiator. Calvin gets full credit for this idea. This was really done to simplify the routing and reduce the bends in the intercooler pipes. This too has some added benefits. The intercooler is now less likely to eat rocks and curbs and it doesn't pick up the warm air that resides just above the pavement on hot sunny days. I've ran the car very hard and have never felt the intercooler get heat soaked.

The intercooler is supported in its new location mainly by the silicone elbows with zip-ties as added support. It is pretty easy to steal (2 zip ties and 2 hose clamps). So I will be adding some ducting. This will make the intercooler herder to steal. Plus it will keep the air heated from the oil cooler out of the intercooler. It will also scoop air from below and route it up to the radiator.

The exhaust on this car has to be pretty custom (what isnt). I ordered a flange from RRE and some found some 3" mandrel bends locally. It's pretty straight forward. This photo shows the basic bends of the exhaust.

We found some pipes in my uncle's shed which we used for the wastegate tube sections. We didn't measure very well though. The wastegate actually runs into the firewall a little so we had to bang it out(3.2MB video). The oxygen sensor bung is actually the bung off of the Starion's primary cat. The DSM O2 sensor screws right into it.

Don't think too hard with this one. You don't need -AN fittings and all that fancy stuff. You can use the DSM's high pressure line and low (100psi) pressure oil compatible hose. The DSM power steering line does not work with the Starion gearbox. At first I tried to use D50 power steering lines, but they also have different fittings (o-rings). The Starion gearbox uses simple flared fittings, as does the rubber section of the DSM high pressure line.

I simply removed the flare nuts off of the old Starion P/S lines and off of the DSM high pressure line. I then bought some 3/8" hardline used for either a fuel line or brake line. Every parts store has a rack of these. You don't need but maybe 12". I cut one end off of the hardline to remove both flare fittings. I slid the DSM flare on one side and the Starion flare on the other. Then I double flared the end I had cut. To put it on the car you need to bend the hardline about 90 degrees in a graceful bend. No need for a tight radius. The Starion flare goes right into the Starion gearbox and the DSM flare goes into the DSM high pressure line. For the low pressure line, you need ??" hardline. cut one end off. Remove the fitting and slide on the Starion fitting. You can then slide your low pressure oil hose over the cut end. Hose clamp that bastard and route your low pressure line. Don't forget to tie it into the power steering cooler that runs across the front of the bumper. The best way to route the high pressure line, is right in front of the timing cover. You can use any power steering reservoir you want. I used the DSM one due to the locations of the inlet and outlets. It also bolted into the stock location without modification. I used lines from either the Starion or DSM to connect it to the power steering pump.